Perfect Results: How To Create a Valuable Marketing Campaign

What is a multi-channel campaign?

Marketing campaigns are an organised, strategised mechanism used by businesses to achieve a specific goal. These efforts may include but are not limited to spreading awareness of a brand’s product/service, remarketing or collecting public feedback. These mechanisms need to be chosen carefully and may entail a combination of media such as Paid Media; Social Media; TV and video advertising. The overall objective is to accomplish a specific result. So, where do you start? What do you do, and how do you know if your campaign was successful? We’ll answer these questions (and many others) in this article.

How do I build a prosperous marketing campaign?

Before you even start planning, you must understand your campaign needs to have consistent themes across all marketing channels. E.g. If you’re using Instagram, a billboard and email, ensure the logo, colour scheme as well as tone and voice of the core message is constant. This allows prospective customers to make a direct connection that will be embedded in their mind. Entrepreneur South Africa correctly says that ‘planning a marketing campaign starts with understanding your position in the marketplace and ends with details such as the wording of an advertisement. Keep in mind that your plan for a marketing campaign is not supposed to be a prison. You have to leave room to make changes as you go along because no plan can perfectly capture reality.’

1. What is the purpose of your campaign?

Firstly, ask yourself a few simple questions, ‘why are you running this marketing campaign?’ and ‘what is the end-goal you want to achieve?’ Common reasons include generating quality leads, boosting revenue and expanding online visibility for your business. Your purpose underpins all future actions; if you cannot determine the ‘why’, take a step back and rethink your campaign.

2. What is my campaign budget?

Defining how much money you can spend early in the campaign planning process will help you determine your goals, strategy and even how much content you can create, says an article published by the Digital Marketing Institute. Below is a fantastic image that breaks down the various categories which you’ll need to take into consideration when setting your campaign budget. Speak to industry professionals who will assist you in setting a realistic budget: 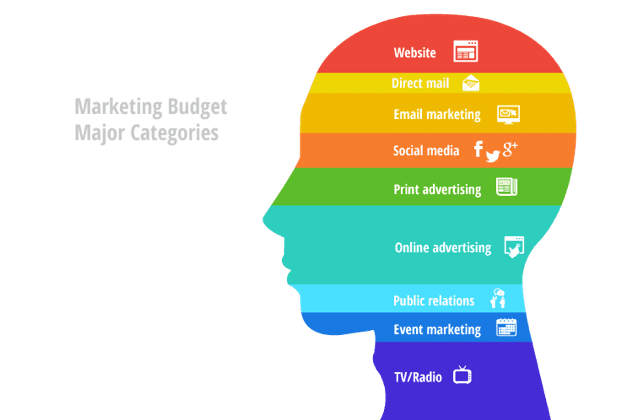 3. How do I measure my campaign?

If you don’t have a measurable objective, a campaign is simply an idea. It’s essential that you identify which channel-specific metrics you want to measure and track. Trackable high-level metrics include SEO, social media, email, landing page and lead capture actions. Within each of these, certain influential signals will be analysed and interpreted. For example, if you want to track SEO throughout the campaign, then indicators such as click-through rate, bounce rate, time on page and conversion rate should be priority data touchpoints. Accurate supporting data is essential for gauging whether or not your campaign achieved its goals.

4. Who is your audience?

Obtaining accurate data hinges on the premise that you have a defined market/audience at which the campaign is aimed. Numerous factors can be pertinent here but the basic criteria upon which you can build include age-range; gender and geo-location. For more advanced factors, please read Should I Use Online Marketing For My Business? In that article, we discussed and explained what a conversion funnel is and how it works. Primarily, it helps you refine your target audience even further through pinpointing the stage of customers’ journey along the path to purchase. The bottom line is that extensive market research is needed to ensure you use the correct marketing tools for your campaign. It’s best to focus on a few marketing mediums instead of risking your message being too thinly spread across potentially inappropriate platforms for the campaign.

How do you distribute your marketing campaign?

There are four kinds of media distribution channels. Here are a few examples.

Ads that you have paid to be listed. Examples include Paid Media; Display Ads; Remarketing.

Any piece of content about or produced by your company that organically appeared on mainstream media channels. E.g. blog posts; social media posts.

Content that you produced and distributed across various marketing channels, such as websites and accounts on social media platforms.

Each has dedicated types of marketing approaches. This decision is dependent on your target audience, budget, as well as brand engagement preferences. Expert full-house digital marketing agencies will explain and recommend the correct tactics for distribution depending on the campaign’s goal.

How do I convert leads into customers?

5. How will my campaign drive the desired action?

Earlier, we spoke about the importance of the campaign needing to be data-driven because it will determine whether the desired action will (or will not) be achieved. In addition to tracking pre-planned metrics, other marketing conversion assets such as effective call-to-actions (CTAs) and lead-capture forms should be integrated into your campaign marketing plan, all of which is best facilitated by a professional agency.

Assessment of your campaign

The post-campaign assessment consists of measuring, analysing, as well as interpreting tracked and monitored data. It provides you with objective, real-time insight into the traction of each marketing channel. From there, you can determine the strengths and weaknesses of the campaign. Don’t be disheartened by areas that didn’t work out as planned. Campaigns are dynamic entities; every element is part of the learning curve.

6. Was my campaign effective?

Many businesses will say their campaign was successful because it attained the goal. Yes, while this is a good indicator of performance, it really comes down to whether it provided you with valuable information that gave you an ROI that is proportional to the number of resources that were used. For example, if you accomplished your goal but went over your budget, there are clearly improvements that can be made next time around.

Now, as you begin your next marketing campaign efforts, apply the collected data to its corresponding elements. Our expert team at Fio Agency can help you streamline the process. We employ a world-class team of digital marketing gurus who are well-versed in all the touchpoints we discussed.